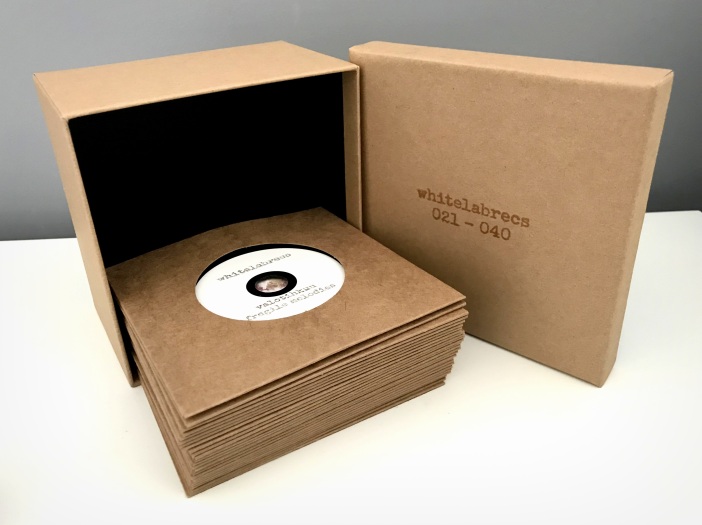 We’ve managed another 20 releases since our last box set, so we thought we’d prepare ‘volume 2’ following our last set which covered releases 1-20.
This new box set starts at re-issuing a ‘whitelabel vinyl’ effect version of our Whitelabsounds compilation and includes all catalog numbers until WLR040, which is Daliah’s Holy Mountain.

Also included are some out of print items, from artists such as Sven Laux, Steve Pacheco, The Prairie Lines and Slow Heart Music.

We’re committed not to re-press any albums as we want to keep things small and collectable but for those looking to either preserve the collection or play ‘catch-up’ if you’ve only recently discovered us, we think it’d be nice to make things available as a box set.

The package itself is simple and ‘DIY‘, very much like each of the CDr releases we put out with a card board box being the perfect size to comfortably house the 20 discs. The boxes are hand-stamped in an ink colour of your choosing and the vinyl-style CDrs will be contained with a polaroid of the cover artwork and inside card sleeves. Again, you can choose the colour of the sleeves.
You’ll be contacted following your purchase and we’ll consult on your options and then we’ll order the materials, burn the discs and deliver to you securely!

We’ve another limited edition vinyl-effect CDr lined up on Whitelabrecs and this time we welcome Lyon, France based artist Ludmila. Jori Borla, the artist originally hails from Argentina and to date has only self released his material, meaning that 1 Day 1 Track is his first physical release. This record was made in a week during a holiday period when Jori would spend a short time recording live. The result is a beautiful electro-acoustic album that may appeal to anyone who enjoys Willamette, Hammock or Shaula. You can listen to a preview of the album by using the Soundcloud player below or keep a check on our Facebook or Instagram pages to preview the packaging when we share it.

press release
“Ludmila is an artist named Jori Borla who currently resides in Lyon, France but originally from Salta, Argentina. To date, Jori has largely self-released his material and we’re pleased to be able to offer his debut of sorts on Whitelabrecs. Jori has experience performing in bands as well as playing instruments such as guitar, cello and bass however he began his project as Ludmila a couple of years ago, after the birth of his son. Typically he would perch upon an uncomfortable stool by his amplifier and experiment with spontaneous tape loops.

In ‘1 Day 1 Track’, Jori set about recording one track every day for a week in which he describes it as the ‘best holidays ever’. Each track on the album is a cropped section of a recording session that lasted from between 10 and 20 minutes, a process repeated each day. In one very peaceful week, Jori recalls playing free from thought, with the takes being improvised without the aid of a computer. Often when artists embark on the creative process, rules and pressure are applied and a lack of quality time devoted to one’s craft can breed frustration. By taking time out during his holidays for just a short period each day, the music flowed and a beautifully cohesive album was born.

Jori also states that 1 Day 1 Track has an additional loose concept which is about finding himself in other lands. This is reflected in the cover artwork as a distant image of an ill-equipped human being can be seen free-falling from high in the sky, towards the unknown ground beneath them.”