Today we’ve another edition this morning to our growing catalog as we continue to release the exciting set of records we’ve got lined up for 2018. Next we welcome James Armstrong as Slow Clinic with a pair of mid-longform guitar drones, full of warmth and texture.

‘Discarded Things Once Lost‘ was recorded for a dance production at Northampton University, UK and it was created using gifts James had received from a previous relationship which gave the album an unintended theme.

This one should appeal to fans of Gareth Hardwick, Wil Bolton or Ian Hawgood

You can listen to a preview of the album by using the Soundcloud player below or grab one of the remaining copies by clicking the bandcamp player or link below.

This went to out to our mailing list last weekend and at time of writing, we’ve got just 12 copies left! To find out more, you can click the link below or on the image above to listen. To avoid missing out on future releases, you can join our mailing list HERE 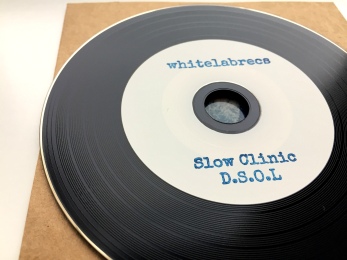 press release
“Slow Clinic is Farnham, UK based artist James Armstrong who also runs the newly formed tape label Rusted Tone Recordings and has works previously released through labels such as Elm Recordings, ARCHIVES, Cruel Nature Recordings and Audio Gourmet. The Slow Clinic sound varies depending on the reason it is being created but typically, James starts by building layers of guitar swells pushed through an endless feedback delay pedal and then into a large reverb pedal. He will then usually improvise loops until something develops, incorporating unconventional techniques along the way such as using violin bows, hand percussion and found objects as a way of conjuring unusual sounds and textures.

‘Discarded Things Once Loved’ was originally created as part one of a two movement composition for a dance production choreographed by Vania Gala at the University of Northampton. Initially, James began making textural recordings by playing various hand percussion instruments and non-musical objects against muted strings. Things like rattles, shakers and hand drums were used to bring out the non-standard qualities of the electric guitar. He added some more conventional drones by sending swells through the usual delay and reverb combination so that it retains some of the characteristics of my previous releases. Everything was improvised and none of the sounds recorded were planned and James would like listeners to treat the album as an opportunity for discovery, to allow the longform recordings time and space to evolve.

All of the items that were used to play the guitar were gifts from an ex-partner and their family. As much as James was trying to avoid thinking about that period of time, there was no escaping it when the items were physically in his hands. From here the title ‘Discarded Things Once Loved’ emerged as the instruments had been hidden away gathering dust for quite some time. James also strived to see what sort of sounds could be created as a result of playing the guitar in such a way that the majority of his control and intention was removed from what came out of the instrument.”