We’re to announce today this new double album by Sven Laux, who has adapted last year’s Home Diaries album ‘Scattered Fragments of Separation‘ with a new album of material. This is available now in a special double gatefold CD edition, with the 2 discs containing a total of 17 tracks. 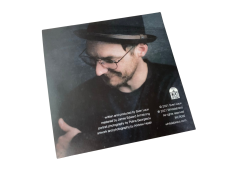 press release
“In 2020’s mammoth Home Diaries series, Berlin composer Sven Laux contributed the 25th edition in this collection, which focused on the lives of sonic artists from across the globe and their own unique experiences during the pandemic.

Sven was handed an unplanned hiatus from creating music, due to staying some 100 kilometres away from his studio. He was based with relatives for childcare purposes and the weeks away from his art led to him returning home alone. He knew that whichever path he took, a compromise was required as he had to either be away from his family or separated from the creativity that so defines him. Separation became the theme to an immersive collection of ‘fragments’, which was created almost instinctively over a short period of time following his return.

Later in 2020, sunken and heartbroken, Sven set about exploring these themes once again. The result is an expansive double album, containing both the original 9 pieces that were released as the Home Diaries edition and 8 new pieces. This is a record that is unapologetically cinematic, presented by an artist who is adept in sound design and writing music for film. The honest and reflective portrait photography by Polina Georgescu cements this as an auto-biopic experience, Laux’s most personal album to date. Scattered Fragments of Separation (The Complete Story) follows the ‘Schachmatt’ and ‘ODD’ albums released in 2018 and 2019 respectively and marks four successive years of releasing music with us. Sven has also released with labels including Archives, Dronarivm and Fluid Audio.

In the liner notes on the CD, it is stated that this is ‘music for the brokenhearted, written by a broken heart’ and in just under 2 hours of sound texture, the music will both break and restore you, as melancholy moods are interspersed with moments of drama, peace and acceptance.“