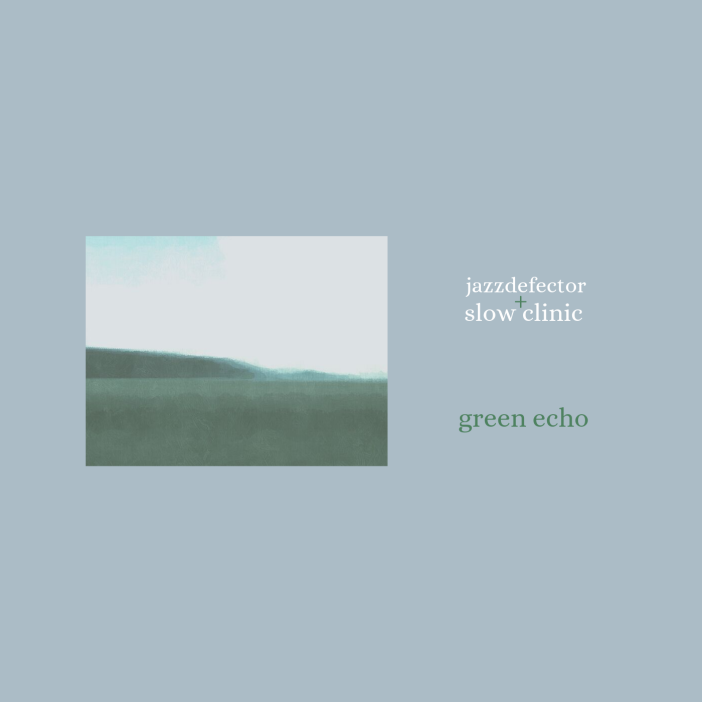 We’ve been busy shipping parcels of the recent Gray Acres album and also, preparing our next limited edition CDr. This one features a collaboration between two artists who have released solo albums with us; Sebastian Buccheri as Jazzdefector and James Armstrong’s Slow Clinic. The duo met after James admitted on social media that he was suffering from writer’s block and their work together produced something that flowed freely. ‘Green Echo ‘is an album of varying drones, full of peaks and troughs which ebb and flow through moments of solitude and more epic bursts. Sebastian’s signature guitar sound is interspersed careful soundscaping. This will be available in 2019’s signature gatefold-LP style CD, in a run of 100 copies  and we’ll release this officially on or around the 19th of October 2019. This one might appeal to artists such as Robin Guthrie, Darkroom or Thom Brennan.

press release
“Our next release sees the return of both Jazzdefector and Slow Clinic, who contributed albums to our catalog in 2016 and 2018 respectively. The pair have been connected via social media for quite some time but when James Armstrong (Slow Clinic) had posted about a stint of writer’s block, Sebastian Buccheri (Jazzdefector) messaged to suggest a collaboration.
James agreed and set about creating the sort of paired-back material which started this journey, with his debut for Somehow Recordings; a guitar, a volume pedal, octaver and an endless feedback delay. This was passed over to Sebastian who added his signature guitar sound to add new layers of improvised melody to James’ drones.

The collaboration that became ‘Green Echo’ drew out a combined strength between two artists who had reached a plateau in their creativity at that point. In their mutual brick walls they found that the blocks were removed through the creation of Green Echo. The bouncing back and sharing of ideas, or echoes if you prefer, translated into something greener, as hope and optimism took hold. The album itself has also become a collection of memories which reflect this positive experience created in winter and for Sebastian in particular, he recalls the fading green landscapes of the midlands, UK countryside in which he lives.”