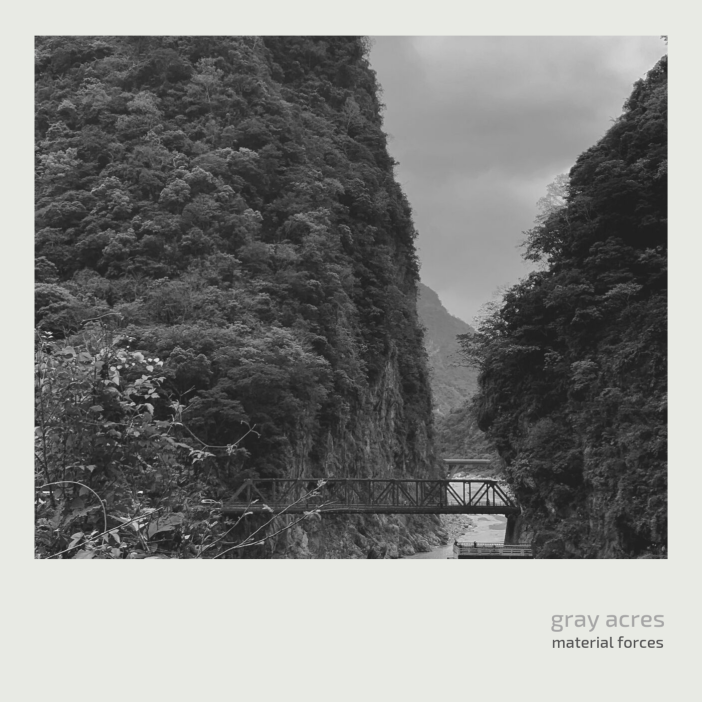 We’ve had another short break since releasing the recent album by xu and next we’re excited to announce the follow-up album by Gray Acres, whose debut emerged on Sound In Silence last year. Brothers Andrew and Mike Tasselmyer are based in Philadelphia and Baltimore respectively and some will recall their work as Hotel Neon, which has appeared on labels such as Archives and Fluid Audio. ‘Material Forces‘ combines tactile field recordings based in Asia with immersive drones. This will be available in 2019’s signature gatefold-LP style CD, in a run of 100 copies  and we’ll release this officially on or around the 5th of October 2019. This one might appeal to artists such as Warmth, Wil Bolton or James A. McDermid.

press release
“Gray Acres are brothers Michael and Andrew Tasselmyer, whose debut album was released last year on Sound In Silence. The project began in 2017 as another creative avenue for these two artists, who are already established as Hotel Neon as well as working on other collaborations and solo ventures. Andrew records under his own name as well as working with Tobias Hellkvist as Mordançage whereas Mike records under the alias Transient Sounds.
The brothers are originally from Baltimore in USA and whilst Mike still lives there, Andrew moved a hundred miles or so away to neighbouring city Philadelphia. Their work is initially created independently by building ideas, loops and recordings and these are realised into full tracks once they get together in person.

Material Forces became the name of the follow-up to last year’s eponymous unveiling, a dense but physical drift session which is as tactile as it is lulling. They did not initially have a clear vision on what this record would eventually become and much of it was performed live, with limited post-production. A key element is some field recordings taken in Asia, which provided the influence for the concept as they were all selected specifically for their powerful, intense characteristics. Rushing water, thunder claps, rock, earth and other heavy materials helped inspire the title ‘Material Forces’ as these field recordings become a focal point in which the power of the natural world collide with softer, processed guitar and synth drones to mimic the undeniable beauty that is left behind by nature as it shifts and evolves.”