We’ve a few more limited edition vinyl-effect CDr releases left to release before the year’s out so we’d best get moving. So next up, we welcome Caminauta. Cami Gadea is a Uruguayan sound artist who is residing in Sweden at the time of writing, with a previous release on Ukrainian label Delta Shock. Fragments is the debut Caminauta album and features ten tracks that span the sonic territories of electronic, neo classical and Ambient music. This should be a record that fans of either Jürgen Müller, Andy Stott or Ricardo Donoso might enjoy.

This album was announced to our mailing list last weekend and there are some copies available still at the time of writing. You can listen to the album in full by hitting play above or clicking the link below, where you can purchase a physical or digital version. To avoid missing out on our future releases, you can join our mailing list HERE 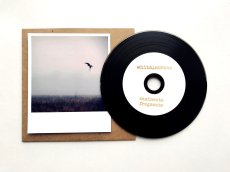 press release
Caminauta is an artist originally from the small town of Treinta y Tres, Uruguay, currently based in Sweden. Her only previous release to date was a cassette EP named ‘Extinct’ released in September 2017 by Ukrainian label Delta Shock. We’re pleased to be able to present her debut album ‘Fragments’.

She has been performing music since she was 14 years old, starting with guitar before progressing to bass and synthesizers.
Her current sound continues to explore synths, with both software and performance based work being the backbone of the Caminauta sound. She has a live set up too and last year she was able to participate as part of the Flo Festival in Porto Alegre, Brazil.

‘Fragments’ is a record centered around melancholia, loneliness but also nature and stylistically it adopts her signature sound but with plenty of variation within these generous 10 tracks. The opening moments use arpeggios where as other pieces are more drone and soundtrack based. Some pieces have the lightest hint of ‘electronica’, as subtle beats provide a feint pulse and you can even hear poetry, in a tribute to the memory of her friend Alec Wildey.

This album was recorded during a process of personal growth, as she wanted to express those emotions. The recordings are intended to speak of her perception of how she sees the world in general and her process of internal search. The tracks themselves and the details within each of these are fragments, to represent moments in her life and this is where the album adopts a melancholic approach as well as a sense of wonder to the world around us.