Out now on Whitelabrecs, we welcome a textured Ambient/minimal electronic producer from the United States, named Overshift who has appeared on labels such as Psicodelica, Yoruba Grooves and Galanding. Of Light and Shade is an immersive listen full of detail, intended for either conscious, or subconscious listening in line with Brian Eno’s original concept of Ambient music. Those who enjoy Krill.Minima, Robert Henke or Echospace might enjoy this record – you can stream or purchase the album by clicking the player above.
Of Light and Shade is also available in our usually limited run of 50 copies to the world, housed in vinyl imitation CDr packaging. 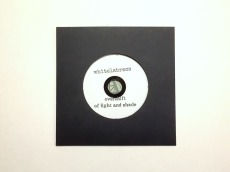 press release
“Overshift is an Electronic Sound artist from New Jersey, USA who has released through several labels including Psicodelica, Yoruba Grooves, Galanding and Listen:React. At an early age, he became fascinated with DJing and learnt to mix on belt-driven turntables. Production was then the natural evolution as he began recording just after the millennium. After a ten year hiatus to focus on his career, the creative urge returned in 2013, as he assembled a small studio after time spent researching different room modes and installing proper acoustic treatment. This studio has been expanded and adapted as his collection of hardware and software has developed.

Overshift’s approach to music production is steeped in a ‘less is more’ approach as layered Ambient environments and textured Minimal Techno have become his signature. Initially, he will work on something new with a certain feeling or story in mind. This is usually something which correlates to an intellectual concept and can be inspired by almost anything. The process is usually a matter of just experimenting with sounds until it aligns with the concept that he intends to convey. Subtle background textures are carved from tape and vinyl noise. Random modular sequences and patches are prepared to compose a general melody and in some cases, percussive and rhythmic elements are developed. Once the basic building blocks are in place, slight variations are applied over a four to eight bar loop. From here, dozens and dozens of layers can be added from items such as field recordings, old vinyl records, textures, rhythms, but it is also not uncommon for there to be considerably less. All the while, a crucial element to the Overshift sound is the juxtaposed concept of controlled randomness: once a general arrangement is in place, multiple takes are patched randomly with generated sequences and modulation. Further micro-edits are developed from each take, using the bits that work, and deleting those which don’t.

Overshift straddles the lines between Ambient music and Minimal Techno striving to overlap these genres. For Whitelabrecs and in his album ‘Of Light and Shade’ he focuses more towards the Ambient aspect as marginal movements of innumerable sound sources combine to form what is ultimately a truly immersive listening experience, built from almost nothing. He aimed to flesh out a sonic duality and as a result, Of Light and Shade is an experience that could either be listened to intently, or simply heard.”